Understanding Culture(s): Promises and pitfalls of Out of Eden Learn and other intercultural digital exchange programs

The research described in this blog post was conducted by Out of Eden Learn team members Anastasia Aguiar, Susie Blair, and Liz Dawes Duraisingh.

In our interdependent yet divided world, how can we support learners to develop nuanced understandings about culture and to engage in thoughtful intercultural inquiry and exchange? A recent post describes how our interest in this question arose because numerous students reported appreciating learning about different cultures via Out of Eden Learn, even though this was not an explicitly-stated program goal. More specifically, we have been exploring the following questions: How do young people think about culture–that is, both the concept of culture and the cultures of different people? In what ways do online learning experiences with culturally-diverse peers appear to promote or hinder the development of their understandings?

An initial round of student interviews in the spring of 2016 helped us to clarify our aspirations regarding what students might learn about culture through Out of Eden Learn, and to inform our curriculum and research design. Then, beginning in the fall of 2016, we implemented pre- and post-surveys intended to capture shifts in our teenage students’ thinking about culture after participating in our program. We decided to focus on students in late middle school and beyond because we expected them to be both inclined and capable of thinking about the concept of culture, as well as their own identities and lives, in relatively complex ways. We subsequently interviewed 26 students via Skype to further understand their perspectives and experiences, and then analyzed the transcripts of those interviews to see how students talked about culture and their experiences on Out of Eden Learn. We are currently preparing a research paper as well as considering how to adapt our curriculum design in light of our findings.

In the meantime, as part of our commitment to develop practitioner-friendly tools, here is an overview that is intended to alert educators to some possibilities (and potential pitfalls) of intercultural digital exchange programs for enhancing older students’ engagement with and understanding about culture. The overview is a distillation of what students reported thinking and doing as a result of participating in Out of Eden Learn and what we noticed them doing when they talked about their experiences. It isn’t intended as a tool for assessing individual students.

Our research suggests that intercultural digital exchange programs like Out of Eden Learn can offer students opportunities to:

CONNECT AND CARE. Such programs can foster respectful curiosity, a sense of connection to or solidarity with other young people, an appreciation for and knowledge of other cultures, and a desire to connect with peers across different cultural contexts. Young people say that they appreciate the opportunity to connect in authentic ways with diverse peers in a safe, social media-type environment: it appears that intercultural digital exchange programs can be powerful gateway experiences that leave students inspired to learn more about culture.

SEE CULTURE EVERYWHERE. Being exposed to a range of firsthand stories and perspectives can expand young people’s view of what “culture” means: they can come to see it as a complex, fluid, phenomenon of which they are a part, and as something deeply individual and personal as well as something associated with particular geographies or communities. While foods, fashions, and local traditions, for example, are recurring and welcome topics of discussion on Out of Eden Learn, many students pick up on other, subtler aspects of culture, such as communication styles, prevailing cultural values and behavioral expectations, and relationship patterns across different generations. They also hear from students who experience cultural hybridity on a daily basis and/or come to see that there can be range of cultural influences within any one community or place.

(RE-)CONSIDER AND (RE-)COMPARE. For some young people, programs like Out of Eden Learn present an opportunity for them to actively consider the existence of different cultures for the first time and to compare their own culture and life experiences to those of other young people, be they their own classmates or students living thousands of miles away. For other students, it is more a case of re-considering what they thought they knew about different cultures and/or re-comparing their own culture to those of others – which may help overturn existing stereotypes or faulty assumptions (though may also lead to some of the pitfalls listed below). For all students, intercultural interactions can enhance their understanding of both commonality and diversity within and across cultures.

BECOME MORE SELF-AWARE. Programs like Out of Eden Learn can become vehicles for promoting students’ self-awareness of their own perspectives and why and how they might be similar and/or different to those of people living in other cultural contexts. The opportunity to (re)consider and (re)compare their own and other cultures can help students to situate their own lives, identities, and values relative to other students and to reflect on the ways in which they themselves are shaped at least in part by particular cultural influences or expectations.

THOUGH BEWARE … THE THREE ‘O’s’

Even while engaging in the opportunities listed above, students may also write or say things that reflect the following pitfalls:

OVER-GENERALIZATIONS. Students can at times default to single stories, make sweeping or vague statements about their own or other people’s cultures, or gloss over similarities and/or differences among different cultures and different individuals. At times, it can seem as if students have replaced a previous single story about a culture with a new one that is based on a single interaction with a peer on the Out of Eden Learn platform. Recognizing the complexity and diversity of cultures can be a useful antidote to this tendency.

OVERCONFIDENCE. Relatedly, students can lack appropriate humility about their own knowledge, over-assert themselves as representatives of other people, or assume their own experiences and/or perspectives as the default. Some students leave Out of Eden Learn appearing to overstate how much they now know about other cultures and how well they understand or can take on the perspective of people from different cultural backgrounds. In our estimation, learning about culture is better viewed as a challenging, lifelong journey, albeit an exciting and enriching one.

OTHERING. We have found that some students tend to romanticize or exotify other people’s lives or circumstances, or make them an object of pity in uncritical and even disrespectful ways–presumably unintentionally. We have found this to be particularly true when students from affluent contexts talk about people who have featured in Paul Salopek’s reporting, but it can also happen when they talk about peers on the Out of Eden Learn platform. Finding the balance between thoughtful compassion and inappropriate pity is not easy, but paying close attention to context can help.

In reality, the categories in the overview overlap with one another. There are also many gray areas where it isn’t clear for example, when excitement and enthusiasm about global cultural exchange crosses the line into exaggerated confidence about how much students think they know or can know about other people’s cultures. As I have noted previously–when writing about cultural perspective taking–there are certainly risks attached with programs such as Out of Eden Learn. However, to my mind, it is indefensible to do nothing to promote intercultural understanding and exchange, particularly at this moment in our human history. To summarize, let’s make a concerted effort to invite young people, and ourselves, to: 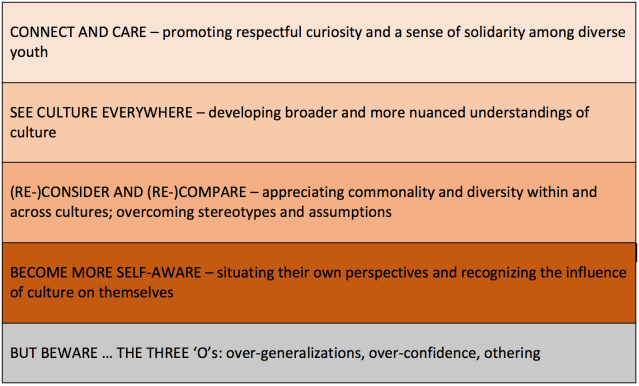 ← The iterative relationship between practice and research on Out of Eden Learn
Beyond waypoints and world maps: Disrupting our understanding of diversity →