The team behind Out of Eden Learn

Last week we organized a “thank you” lunch that brought together various people who have helped to launch Out of Eden Learn. The lunch was the centerpiece of a day-long mini retreat, which involved the core team taking stock of where we have come and where we might be headed with the project (more on that in a forthcoming post).

In a special touch, Paul joined us via Skype from Jordan to thank everyone in person and to update us on his travel plans.

We thought it would be nice in this blog post to give readers some insight into the team behind Out of Eden Learn. Here is the group photo: 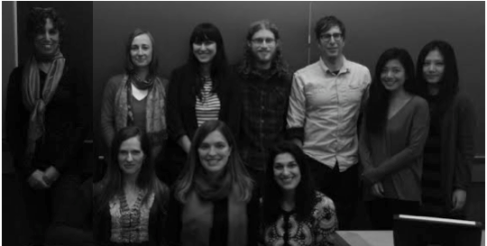 Back, left to right:

Shari Tishman: Director of Project Zero and Co-Principal Investigator of Out of Eden Learn. Shari helps to oversee the whole project and has been closely involved in designing the learning activities.

Liz Dawes Duraisingh: Project Manager for Out of Eden Learn. Liz helped to develop the concept of Out of Eden Learn and oversees the day-to-day implementation of the project. Liz has written many of the blog posts on Walk to Learn, including this one.

Emi Kane: Emi is a director at the Abundance Foundation, the organization that generously supports Out of Eden Learn. She does not live in Boston, but comes to visit often and consults with us regularly, particularly with regards to outreach and communication.

Jeremy Lach: Web developer at ICON Interactive. Jeremy built and is continuing to develop the Out of Eden Learn website. His colleague Will Clafin, who was unable to attend the lunch, also provided support.

Jon Sulkow: Creative director and designer at ICON Interactive. Jon is responsible for the beautiful styling of our website and its overall design.

Jessica Fei: Doctoral student at the Harvard Graduate School of Education. Jessica is currently completing an internship with us as part of the Early Career Scholarship Program under the umbrella of the Civic and Moral Engagement Initiative here at Harvard.  However, she has been part of our team from the start and has particularly contributed to the curriculum design.

Dami Seung: Project Assistant at Project Zero. Part of Dami’s work involves providing administrative support to Out of Eden Learn. She has worked closely with Liz to help develop the website with Jon and Jeremy this year.

Caroline Page: Current master’s student at the Harvard Graduate School of Education. Caroline has recently started devoting several hours a week to our project through her work-study program.

Stephanie Kacoyanis: Communications Coordinator for Project Zero. Stephanie oversees the social media strategy for Project Zero as an organization. She recently joined the Out of Eden Learn team to manage our new Twitter and Facebook accounts.

It has been a joy so far to work on this project. We may not be traveling as far as Paul but we are on a collective learning journey of our own.

← A Space for Dialogue
Finding our place in the world →