August 22, 2016 · by Liz Dawes Duraisingh · in Curriculum and Research, Resources · Leave a comment

This spring we piloted a new curriculum on Out of Eden Learn: Stories of Human Migration. Classes from the United States, Canada, Singapore, and Australia participated. We were fortunate to work with a group of talented and committed educators—Brenda Ball, Sharonne Blum, Oliver Brown, Chris Sloan and Sandra Teng—who enthusiastically shared their ideas and experiences and offered us candid and constructive feedback on the curriculum. In the fall we will be opening up this learning journey as an option for students aged 13-18, who may or may not have completed one or both of our core learning journeys. This blog post provides an overview of the learning journey and explains the rationale behind it. An upcoming blog post will take a closer look at students’ work.

Why did we choose to design a learning journey based on the theme of human migration? First, as Paul has been walking, this topic has (re)asserted itself as one of the most important and urgent issues of our times. In fact, Paul became an early eye witness to the scale of the ongoing migrant crisis in Europe when he found himself walking alongside a flood of people who had broken across the border from Kobani, Syria into Dikmetas, Turkey in September, 2014. At the time he memorably commented, “If you think this exodus won’t touch you, you are a fool”– a remark that has proven all too prescient. Moreover, given that one of the key premises of Paul’s walk is that he is retracing the migratory pathways of our ancient human ancestors, the thematic tie-in to the Out of Eden Walk is clear.

Second, we were interested in developing a learning journey that offered more substantive content than Learning Journey 1 and Learning Journey 2. Our core learning journeys support a somewhat open-ended exploration of young people’s immediate and broader worlds and promote thoughtful cross-cultural exchange. We had heard from a few teachers – particularly those of older students – that they would welcome the development of curricula that more directly targeted helping students to acquire specific knowledge about the world. While our new migration learning journey is designed to be open-ended enough to allow individual students to carve out their own pathways and to make personal connections to the topic, it incorporates more resources than our other learning journeys. These resources are intentionally diverse in terms of authorship, genre, and focus and include pieces that pay particular attention to how young people are being affected by migration.

Third, and perhaps most importantly, we wanted to experiment with engaging diverse youth around important yet potentially contentious issues. While Out of Eden Learn has developed promising design principles for promoting thoughtful cross-cultural inquiry and exchange, the majority of exchanges on our platform do not involve young people engaging critically with the world or discussing social or political issues. Indeed, part of the beauty and appeal of Learning Journeys 1 and 2 are that they allow young people to interact with one another on a very human and personal level. We wondered, however, what it would look like to engage students with different backgrounds around a potentially sensitive and emotive topic, especially given the increasingly toxic and polarizing discourse about migration in some parts of the world. How might the principles we have developed to promote meaningful cross-cultural inquiry and exchange be applied to discussions about more sensitive topics, and to what effect? Would we need, for example, to offer a modified dialogue toolkit to support constructive dialogue?

In terms of the learning goals for this learning journey, we wanted students, as in our other curricula, to (1) slow down to observe the world carefully and to listen attentively to others, (2) exchange stories and perspectives with one another, and (3) make connections between their own lives and bigger human stories. More specifically, our intention was to support young people to:

We will soon post the full curriculum on our platform as a free resource for all interested educators. For the moment, as we complete a few tweaks, here is a summary of the footsteps we piloted to give a sense of the learning journey’s arc. 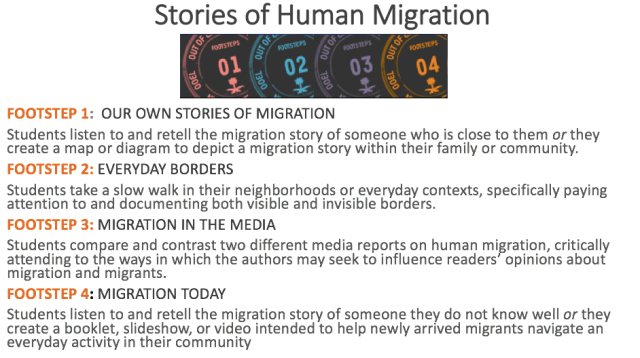 It is important to note that the curriculum defines migration in very broad terms:

Migration stories do not have to involve moving from one country to another; they can involve very short distances or frequent journeys you make, for example to work or school. Migrations can also be forced by governments, wars, or other circumstances such as natural disasters, lack of resources or changes in the environment.

This definition is intended to encourage young people to think about migration expansively and in ways that implicate their own lives, regardless of whether or not they consider themselves to be migrants. Moreover, the curriculum deliberately begins by tapping into students’ own experiences and knowledge about migration in a bid to engage them in the learning journey. The curriculum progressively becomes more outward looking, with the fourth footstep inviting students to learn about or reach out to people they do not already know well.

What did we learn from our pilot? We were excited by young people’s responsiveness to this curriculum and the thoughtfulness and sensitivity with which the vast majority of them approached the activities. This topic seems to have encouraged participants to explore their own identities and values in meaningful ways, as well as to consider their future aspirations – issues to which teens are naturally inclined developmentally. For example, Alyssa from Beaverton, Oregon, USA wrote:

I am looking forward to graduating from high school and going to a university. I also am interested to learn about my background and understand others better from this class. So far I have had to do some digging to find out where I am from, what my ancestors were like, and maybe get a chance to understand who they were. This has me wondering about my own life in aspects of passion, family, sacrifice, and faith, or even “fate.”

Overall, students produced powerful, nuanced, and varied posts. The focused nature of the learning journey—and the topic itself—seems to have encouraged students to produce more detailed and reflective work than we have typically seen on other learning journeys. The socio-economic and geographic diversity of students’ backgrounds added to the richness of the experience because the stories and perspectives that students drew from were so varied. For example, while some referred to their daily commutes on school buses or public transportation, others recounted their grandparents’ migration journeys from Europe to North America or from China to Singapore to pursue educational or economic opportunities. Meanwhile, other students shared their own experiences of crossing the border between the United States and Mexico, while others shared stories about their families trying to escape violence and crime. Students read one another’s posts with great interest, thereby expanding their repertoire of what stories of human migration look like at the individual level. Sometimes they built on each other’s stories and examples. For example, a number of students were touched by a post by Zakhar from Vancouver who described the intense homesickness that a friend called Negi felt for Iran. ChaoKouhai05 from Singapore, for instance, commented:

Negi’s story is a sad yet touching one! I have never migrated before, so I cannot say that I understand how she feels. My father’s father (grandfather) came from China as an immigrant, and he missed his hometown a lot so during Chinese New Year, my father remembered that he would often look towards the moon and drink beer as he missed his family back in China. I hope that Negi will have a chance to return home too, as no matter how beautiful and amazing other countries may be there is really no place like home.

Such encouraging and empathetic comments were common. At the same time, different political viewpoints were also on display, particularly with regard to the issue of whether borders are needed to restrict human movement. Students also asked one another probing questions. For instance, turntechGodhead of Beaverton, Oregon, USA asked a student from Singapore: “Do you think the media sets up mental boundaries that we immediately assume as our own?” TooruOikawa17 replied, “I’ve actually never thought of that until now! I suppose, yes. Because of heavy media influence, sometimes people avoid topics of controversy and fail to speak up. I’ve been reading up on this, and there was a recent case where reddit.com/r/news was censoring news about the Orlando shootings because the shooter was Islamic, and by doing so, a subtle sense of avoidance when it came to discussing things like these was realized in myself. Thanks for the insightful comment!”

Unfortunately, student participation was more disjointed than we would have liked given disparities in school calendars and the winding down of the school year in North America: interesting discussions abruptly tailed off, some particularly moving posts did not receive any comments, and some classes were unable to complete the journey. We also learned that students who encounter Out of Eden Learn for the first time through the migration learning journey need more onboarding so that they understand some of the underlying premises of our online learning community and its connection to Paul Salopek’s Out of Eden Walk initiative—even if Paul and his work are not central to this learning journey.

Overall, however, we consider this pilot curriculum to be a strong indicator of the potential power of the Out of Eden Learn model to facilitate meaningful inquiry and exchange among diverse youth on important issues, as well as to help them reflect on their own and others’ lives, identities, and values. We look forward to moving this important work forward. I will share more student work in a follow-up post. For now, I leave you with a “two voice” poem by JohnTitor of Beaverton, Oregon, USA who succinctly intersperses a news report with quotes from migrants.

Italy threatened with an immigration crisis.

“We had to live in a tent in the suburbs of our town.”

“And we are frightened every single minute, every day, and every night.”

“They heard explosions and gunfire nearly every day.”

“Of course we are worried,”

“We were also very frightened of an attack by [Islamic State].”