February 26, 2014 · by Liz Dawes Duraisingh · in Curriculum and Research · Leave a comment

Our home organization, Project Zero, recently held a very successful conference in Memphis, Tennessee – organized in collaboration with the Center for the Advancement and Study of International Education (CASIE). There was a tremendously positive atmosphere during the three days of the conference and we really enjoyed it. Carrie James and I ran three two-hour workshops to introduce participants to Out of Eden Learn, making it a point to engage educators in some of the activities that we ask young people to do on our website. In particular we asked teachers to try out Footstep 8: Relating our own lives to the past. For some background on this activity, see a blog post that I wrote last year: CONNECTING OUR LIVES TO A BIGGER HUMAN STORY.

The instructions for this activity are initially daunting: Draw a diagram or picture to explain how our human past or history is connected to who you are and the life you are living or expect to live. However, given a little reflective time, participants find their way into the exercise and the results are always interesting. Carrie and I were touched by the goodwill of participants, some of whom shared very touching and personal insights about how they thought the past was related to their own lives. In setting up the activity we promised that everyone in the room would approach the task in very different ways – and that this variation was part of the point of the activity.  We were not proved wrong. Three participants in our final workshop kindly agreed to let us share their diagrams in this blog. Please note that participants only had ten minutes to come up with some tentative ideas.

In this first diagram, the teacher has focused on direct influences and events in her own life, with her nuclear family at the center of various concentric circles; the values her family instilled in her feature prominently. Her diagram reflects the particular phase of life she finds herself in: she recently married and moved to Memphis and she and her husband are considering starting a family. She wonders what the future holds but there is a sense of centeredness to her diagram. Although they are obviously at different life stages, we have found that a number of young people participating in Out of Eden Learn create diagrams that center around their families and their families’ values. Some students also include wonderings about their futures. 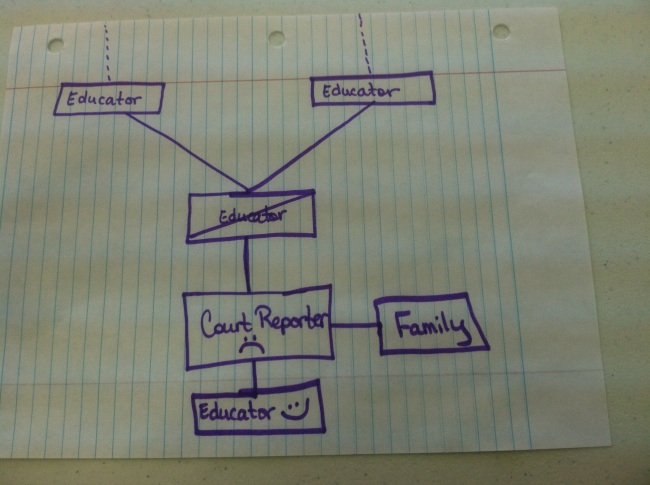 In this second diagram, the teacher is telling the story of how she became an educator. She comes from a long line of teachers and although she initially resisted what seemed like a predictable career path, she eventually embraced what now feels like her calling. While school-aged children are still contemplating their future careers, we have found that some of them similarly refer to the talents or interests they have inherited from their families or to “traditions” that ran down through various generations.

In this third example, the teacher has interpreted the instructions in a completely different way. Rather than focus on her personal journey through life she instead tries to capture our collective human story, much as Paul is trying to do with his Out of Eden Walk. Her diagram symbolically represents our entwined destinies and our common roots in Africa – the starting place of Paul’s walk.  She selects three major threads that define our humanity – biology, ingenuity, and language – and shows how they are playing out in today’s world. We have found that relatively few young people create diagrams that try to embrace humankind in its entirety, although we have found it common for students to reference major themes of human history, such as technological advances or the development of religion.

After having a go at creating their own diagrams, teachers then engaged in a “silent conversation” around three student diagrams that we posted up on the classroom walls: one was by a student from India, another from Canada, and another from he United States. All were aged 16-17. We also displayed reflections the students wrote after viewing other students’ diagrams. (We had conducted this activity during last summer’s Project Zero Classroom, photos of which are included in the blog post LESSONS FROM THE PROJECT ZERO CLASSROOM.)

We structured our conversation around a Project Zero “thinking routine”.

Connect: Think for a moment about how you started to relate your own life to a bigger human story. What connections do see between your own perspective and that of the student?

Where to next? In what directions would you like the student’s thinking to develop? What ideas do you see here that you could build on as an educator?

Some of the observations and questions our workshop participants raised included the following:

While I would caution about drawing too many conclusions from such a small sample, I think using these diagrams as a window into what young people care about can be revealing and a great jumping off point for educators to start important conversations with their students. Moving forward we would like to create opportunities within Out of Eden Learn for students to really build and develop on these initial reflections. What activities or strategies would you suggest?