Uncovering the Everyday: Student work from the Out of Eden Learn project

Young people in countries around the world are slowing down to notice, appreciate, investigate and uncover the everyday in their neighborhoods and local communities. We hope students develop a capacity for and inclination toward slow looking and listening by participating in the Out of Eden Learn curriculum. We recently published a two-part series on our research around “slow,” which shares what we’re learning about how young people are slowing down and what it means to them (Part 1 and Part 2).

In our offices here in Cambridge, Massachusetts, USA, the Out of Eden Learn team often holds micro-celebrations of student work. We share student reflections with one another, look closely at these reflections along with student photos, videos and drawings at regular team meetings and post some of the everyday work we encounter on social media. Looking closely at student work is undeniably the most inspiring part of the work we do. The photos and reflections by students are rejuvenating. Paul has spoken to this point many times, emphasizing how moving he finds the student work.

The student work coupled with our preliminary research findings have generated real energy among team members around young people taking time to uncover the familiar– to “discover the hidden,” as one student puts it. We found ourselves taking a natural next step to celebrate the work by students in a big way.

Our team developed the first-ever exhibit of student work from the Out of Eden Learn project, titled Uncovering the Everyday. Micro-celebrations transformed into hours-long meetings looking at hundreds of pieces of student work, mapping out the gallery space, printing, promoting, and curating, as we aimed to put together a dynamic, rich, digitally sophisticated and participatory gallery exhibit.

Above: Some documentation of the exhibit-planning process.

As with most things on this project, we began by looking at student work. And of course, the most challenging part of putting on this exhibit was choosing the work to feature. There are tens of thousands of posts by students on the Out of Eden Learn platform. We have catalogued thousands of these pieces and looked deeply at hundreds for research. Within this treasure trove of student work, it’s difficult to find a piece that isn’t inspiring in some way. Every neighborhood walk photo is unique. Each Documenting the Everyday video tells a special story. All of the maps students create have their own distinct flair. It was certainly tough to narrow the work down to less than 50 pieces.

At the same time, we began to notice throughout this process how strikingly similar the spirit of student reflections, and even photos, are. We did not begin this work with an exhibit title in mind. Rather, the title emerged after spending several weeks deciding what pieces to include. All of the featured works fit the themed title Uncovering the Everyday but they are also representative of Out of Eden Learn’s wider body of student work. 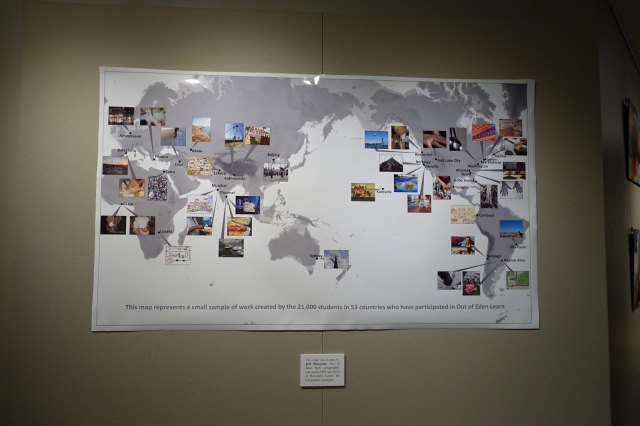 Held in the Monroe C. Gutman Library Gallery from October 2nd-28th, the exhibit received warm feedback from the community at Harvard’s Graduate School of Education (HGSE). The participatory element encouraged community members to experiment with close looking by inviting visitors to share photos taken during their own slow walks using #UncoveringtheEveryday. Participants posted their photos to social media or emailed them to us. The interactive loop streaming at the front of the exhibit grew throughout the month of October to represent a community far beyond the Gutman Library. Educators and students from around the world participated in the exhibit via social media (see images below). 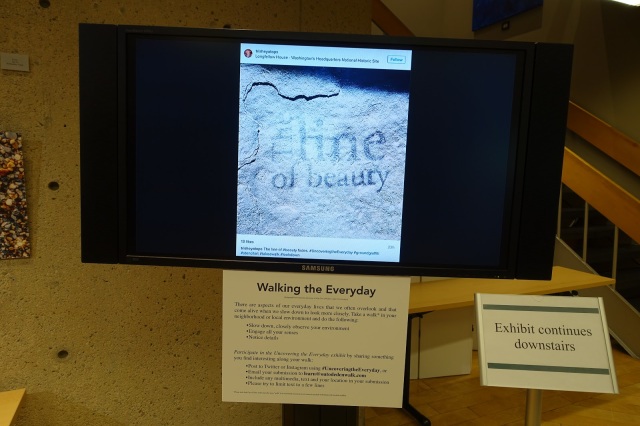 In addition to the screen streaming images and reflections, we presented two laptops at the front of the exhibit, one featuring our website, Instagram and blog and the other featuring a video loop of our two “glimpses from the classroom” videos (here and here) as well as our expanded introduction video. 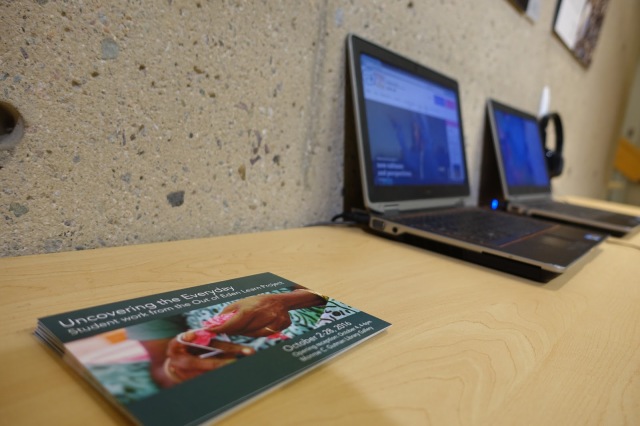 The exhibit included a second large screen where we played a video loop featuring 18 pieces of multimedia work created by Out of Eden Learn students. Headsets were provided for visitors to engage with the various media in the exhibit.

Several of the featured works included a short piece of text by the student artist. The exhibit highlighted student reflections as written works of art.

Exhibit visitor and HGSE Arts in Education master’s candidate Lisa Pastore highlights a take away: the importance of young people making cross-cultural connections with one another. She spoke to the authenticity of the Out of Eden Learn experience, sharing thoughts on how “genuine” cross-cultural exchange can result from young people exchanging their own stories. She emphasizes the importance of a nuanced understanding of culture that’s deeper than the stories told by “the major landmarks” of a country: “There is so much richness in the culture that is in between these major landmarks that we miss and I think that this project does a nice job exposing that…As a teacher, I could see myself adapting something like this to my own classroom.”

We hope to install the Out of Eden Learn exhibit in other gallery spaces and perhaps develop more exhibits of student work as a way to continue celebrating the work by students as well as inspire and invite those not already a part of the Out of Eden Learn community to get involved. For now, we’ve produced a digital walkthrough of this exhibit for our community members to enjoy.

It feels right to close this post with a couple of questions posed by an exhibit visitor and invite members of our community to share your thoughts: Do the students think of themselves as artists? Do we think of them as artists?

At Out of Eden Learn, we see participants as young artists, photographers, storytellers and digital citizens. How do you see your students? And how do they see themselves? Please feel welcome to share your reflections in the comment section below.

← After the Election: Reflections from Out of Eden Learn
Walking shoes, global trade, Santa and more: Paul Salopek responds to young people’s questions →