“To educate with the world in mind.” These words by Verónica Boix-Mansilla, a principal investigator at Project Zero, have for several years inspired my teaching. I have found that having my students participate in Out of Eden Learn has helped me follow that advice. For those who don’t know, the philosophy of Out of Eden Learn is to have our students reflect on the benefits of taking life at a slower pace and consciously and meticulously appreciating one’s surroundings. Out of Eden Learn also allows learners to connect across cultures with students from around the world to share stories, experiences and perspectives via respectful digital dialogue.

In this blog post, I share some of the ways in which I integrated Out of Eden Learn into my existing approach to teaching in Spanish as a Second Language. At first, I translated Out of Eden Learn curriculum materials that were available in English for my Spanish language class. Then, this fall, I participated in the first Spanish walking party pilot, which allowed my students to interact with other students in different parts of the world, all while communicating in Spanish. My 6th Grade Middle Years Programme (MYP) Language and Literature class participated alongside students in Colombia, Argentina and India.

The first project in which I used these resources from “Out Of Eden Learn” (which were only available in English at the time) was with the 5th grade Primary Years Programme (PYP) unit “How We Organize Ourselves.” First, I introduced my students to Paul’s walk and Out of Eden Learn’s philosophy. Afterwards, they started their own activity, taking walks around school and photographing what they saw. Combining Out of Eden Learn resources with Project Zero thinking routines becomes a significant learning process for students.  Using the “See, Think, Wonder” routine from Project Zero, as well as the 3-2-1 Bridge Routine and the “What Makes You Say That?” routine, the classes and activities became richer learning experiences. The students began talking among themselves about their careful observations and started to slow down and see small details.

During the pilot of Out of Eden Learn in Spanish, I also used a variation of the “Listening: Ten Times Two” routine — students listening to the same stimulus twice to uncover its complexity. For this routine, I asked students to 1: Listen to the audio file “The River of Culture,” 2: List 10 words or phrases they heard from Paul Salopek, 3: Share with their partners, 4: Repeat. Students followed this with the “What Makes You Say That” routine, sharing their findings in groups. By scaffolding my students’ first encounter with Out of Eden Learn and Paul’s journalism, I helped them to engage more fully with the walk’s philosophy and to make connections to cultures they already knew, including their own school’s international environment where many different cultures are represented. 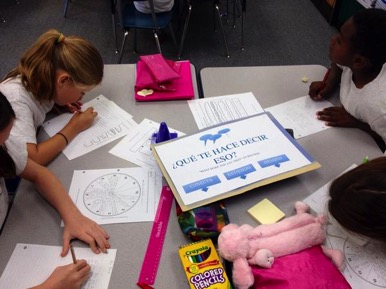 Students explored the ways in which the ideas and information presented in Out of Eden Learn connected to our curriculum. We applied the “Connect, Extend and Challenge” thinking routine to help students establish new ideas and raise questions together.  This routine promotes active listening rather than passive hearing and students looked forward to how these new ideas challenged them to think in new ways. I used Google Classroom to document this process and also utilized Out of Eden Learn’s teacher resources page. 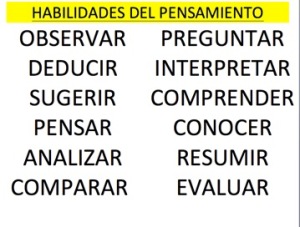 Making use of social media and online tools

I documented my students’ learning process using Google Classroom. Students followed the instructions for “Core Learning Journey: Footstep 1,” making their accounts and choosing their personalized avatars, then explaining their choices on the Out of Eden Learn platform. Next, I posted each footstep in our Google classroom platform and each student used a Google Doc to document all their activities on Out of Eden Learn. Additionally, I used Google Classroom for class collaboration and discussion. Through that, I got a sense of their analysis, organization, text production, and language use and and looked for potential areas of improvement. This is the main reason why I chose to use Google Classroom to document my students learning process. Looking back now, it is powerful to review how my students uncovered the complexities of Paul Salopek’s journey  and how they captured the heart of each footstep in Out of Eden Learn.

We have also followed Paul Salopek’s Twitter account. We tweeted some of our class activities and tagged his account so that he could see the work we are doing in class. Students were very excited to follow Paul on Twitter and to read his latest dispatches on the Out of Eden Walk website. Students were eager to know where was Paul and see his milestones along the way. 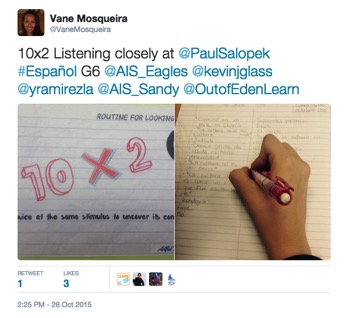 Tweeting a student’s documentation of their 10×2 Thinking Routine.

Evidence of students learning ‘with the world in mind’

During our class’s learning journey, I discovered that our fellow walking partners in Chennai, India were suffering the worst flood they have had in over 100 years. Immediately, my students took action and tried to communicate with their partners, who were thousands of kilometers away. “What can we do?” was the leading and arguably most preoccupying question. We wrote messages that we later sent by email and my Twitter, tagging the Out of Eden Learn page. This was something that my students cared about deeply but knew little about. The students had a competition of sorts to see who could come up with the most thoughtful question relating to Chennai’s flood. “What was the flood’s impact on the city people’s daily lives?” was the winning question, and soon after, I posted it on our Google Classroom page.

This is what one Grade 6 student posted as a response to this question after some short classroom research:

“The impact the flood had on Chennai is incredible. Some 4.6 million people had to suffer during this flood, the worst one in 100 years. 272 have died up to today and that is a grave number. Around 28,000 people have been rescued. The flood has started in October and has gotten worse since then. Chennai has no power, there’s water across all the streets, and many have lost their family members. The airports have been forced to close. However, everything is starting to improve for Chennai, little by little.”

We received a thank you note from Chennai’s teachers via Twitter and, later on, students got more posts of appreciation on the Out of Eden Learn platform.

The following are some reflections by students about their experiences with Out of Eden Learn I collected in our Google Classroom:

“In the footstep Taking Neighborhood Walks I read that in other countries the children go outside to play and talk with friends. Here in Atlanta, most of us are playing video games and we rarely interact without them. I have learned to be grateful for everything I have, and now I know when to stop, take a deep breath, and think. The less you stop, the less you observe. I am grateful for this experience.” Joshua, Grade 6

“I have learned many new things through interviews and I have deepened my learning process [by] making multiple questions. I appreciate being able to communicate with kids across the world and discovering things I have never noticed or taken into account before this international project.” Victoria, Grade 6.

“Paul is doing something very important because he is observing our planet slowly and on foot. Also, he will see it from the eyes of our generation.” Rodrigo, Grade 6

“Mi vida día a día,” a student’s submission for Footstep 5: Documenting the Everyday

Out of Eden Learn has been a unique source of innovation and technological integration for me. It is an opportunity for students to become citizens capable of incorporating themselves easily into a globalized world, and as stated by Verónica Boix-Mansilla, “to educate with the world in mind.”

Many thanks to my students for embarking on this journey and many thanks to OOEL team for their constant support. My sincere thanks to Liz Dawes Duraisingh, Paul Salopek, Aly Kreikemeier, Kevin Glass, Yolanda Ramirez, Elena Zapico, Tabbatha O’Donnell, Sarah Sheya, Susannah Blair and Ruy A. Tobar. 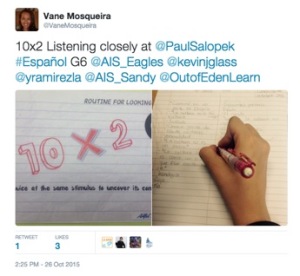 ← Glimpses from the Classroom in Piraeus, Greece: Part 3 of 3
Out of Flint: Out of Eden Walk to Authentic Writing →